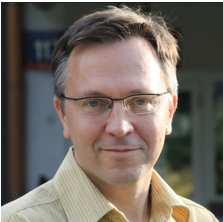 Krzysztof Rybiński is a researcher at Vistula University in Warsaw, and his main focus areas are Big Data, artificial intelligence and machine learning, where he holds Data Science and Natural Language Processing courses. Rybinski received his M.A. degree in Mathematics and Computer Science (1991), and in Economic Sciences (1993), in which later he earned his Ph.D. (1996) as well. Currently, he is taking part of the Visiting Professorship’s program of the Centre for Social Sciences between the 1st of July 2021 and the 30th September 2021.

As a visiting fellow, Rybinski has been participating in the Sentiment-analysis project of TK MILAB, in which the political sentiment analysis of political content through large news corpora is carried out. He cooperated in creating a Hungarian political sentiment dictionary, and worked on the „A computational politics framework for assessing the IO (de)legitimation. A case study of twelve IOs in six post-socialist countries” research with Orsolya Ring to construct a new model of researching how influential domestic politicians use the media channel to legitimize or delegitimize the twelve analyzed International Organizations. The research is based on a corpus consisting one million articles in 22 newspapers focusing on Russia, Kazakhstan, Belarus, Ukraine, Poland and Hungary. Through the TK MILAB Speakers Series he is also holding a seminar in the topic of „Media freedom, bias, and manipulation in post-soviet space. A machine learning analysis of one million articles from five countries” on Tuesday, 21 September 2021, 14:00 CET.

Rybinski is taking part of the Visegrád Fund application as well with Orsolya Ring and a fellow Czech partner in the Improved media and information literacy for increased resilience towards biased reporting, disinformation and propaganda objective of the Democratic Values and Media area. In this proposal, the researchers aim to analyze the media freedom in the V4 countries with the application of different text mining methods to develop a new model of identifying biases in online news platforms to promote conscious media consumption.