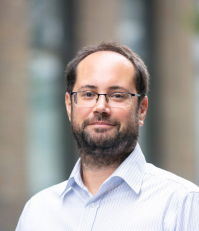 Miklós SEBŐK is a Senior Research Fellow of the Centre of Social Sciences, Hungarian Academy of Sciences (CSS HAS) in Budapest. He earned an M.A. degree in politics at the University of Virginia and an M.A. degree in economics at the Corvinus University of Budapest. He received his Ph.D. in Political Science from ELTE University of Budapest. He currently serves as the director of thet Institute for Political Science at Centre for Social Sciences and the research director of the Hungarian Comparative Agendas Project and the research co-director of the Artificial Intelligence National Lab at CSS, Budapest. His research interests include political economy and public policy and the application of text mining and machine learning methods in these fields. His work has appeared in Business and Politics, East European Politics, the European Journal of Political Research, European Political Science Review, the Japanese Journal of Political Science and Intersections, the Journal of Comparative Politics, the Journal of Legislative Studies, the Journal of Public Budgeting, the Journal of Public Policy, Plos One, and Political Analysis. His book chapters have been published with Oxford and Palgrave. He served as the editor for the first Hungarian handbook on “Quantitative Text Analysis and Text Mining in Political Science” (L’Harmattan, 2016) and on “Text Mining and Artificial Intelligence in R” (Typotex, 2021), and most recently as co-editor of Policy Agendas in Autocracy, and Hybrid Regimes: The Case of Hungary (Palgrave, 2021).